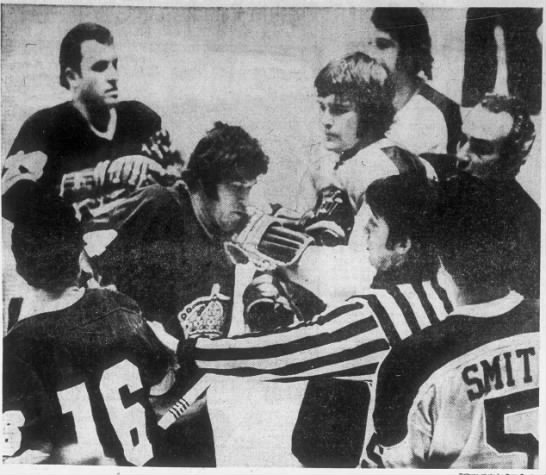 The NHL hasn’t done either of these things in over 50 years.

When it comes to the holiday season, the NHL just says Noel. As part of the league’s CBA, the schedule takes a Christmas break. There hasn’t been an NHL game played on Christmas Day since 1971. It’s been so long since there was NHL action on Christmas Eve, one of the losing teams that night was the California Golden Seals.

On December 24, 1972, Serge Bernier became the first player in @LAKings' history to score four goals in a game. The #LAKings defeated the California Golden Seals, 5-3, in the last NHL game to be played on Christmas Eve.#LAKings #GoKingsGo pic.twitter.com/ETASn1P3fr

On Dec. 24, 1972, the Seals fell 5-3 to the Los Angeles Kings. Serge Bernier paced the Kings with four goals, including the first three of the game. The Seals got goals from Reggie Leach and Craig Patrick, two guys who’d go on to do big things in the game.

Leach scored 19 goals for the Philadelphia Flyers during the 1977 playoffs and won the Conn Smythe Trophy. He’s the only non-goalie from a losing Stanley Cup finalist to win the Smythe. Patrick was GM with the Pittsburgh Penguins won back-to-back Cups in 1990-91 and 1991-92. He was also assistant coach to Herb Brooks with the USA’s 1980 Miracle on Ice Olympic gold medal triumph.

Granted, the Seals losing was never a big story but it was especially back-page news on this Christmas. The day before in the NFL playoffs, the Oakland Raiders lost to the Pittsburgh Steelers on a last-second touchdown by Franco Harris forever dubbed the Immaculate Reception.

Maybe you’ve heard of that play.

On this day in 1972, Ed Giacomin recorded his 40th career shutout, as the Rangers blanked the Red Wings 5-0 in the final Christmas Eve game for both teams #Hockey365 #NYR #LGRW pic.twitter.com/epjUjaACZk

One year earlier, the Seals and Kings also played among six Dec. 25, 1971 games that were the NHL’s last Christmas Day action. This time, California were 3-1 winners.

Elsewhere, a Billy MacMillan hat-trick pushed the Leafs past Detroit 5-3. Al Arbour made his debut as coach of the St. Louis Blues, replacing the dismissed Bill McCreary in a 4-4 tie with the Buffalo Sabres.

This was the fourth – and last – time the @Penguins played a game on Christmas Day. They went 3-1. pic.twitter.com/mVwTDWWXqK

Giacomin got the win as the Rangers edged the Minnesota North Stars 2-1. Phil Esposito and Bobby Orr each collected a goal and an assist as the Boston Bruins pounded the Flyers 5-1. The Pittsburgh Penguins doubled the Montreal Canadiens 4-2, thanks to 40 saves from Les Binkley.