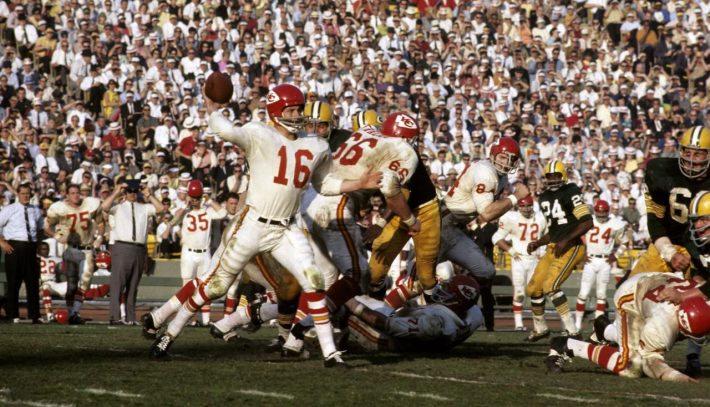 Super Bowl 54 is slated for Sunday, as the Kansas City Chiefs tangle with the San Francisco 49ers. It’s Kansas City’s first trip to the big game in 50 years, and that’s big news for the Toronto Maple Leafs.

In 1970, the Chiefs won their only Super Bowl. They defeated the Minnesota Vikings 23-7. Later that year, the Maple Leafs missed the Stanley Cup playoffs for the second time in three seasons.

KC quarterback Len Dawson gets pass protection before throwing the final touchdown pass of the game to wide receiver Otis Taylor as the Chiefs defeated the Minnesota Vikings to win #Superbowl IV pic.twitter.com/dkTT42K1RM

In 1967, the Chiefs played the Green Bay Packers in the first Super Bowl game. The AFL Champion Chiefs were soundly whipped by the NFL’s Packers 35-10.

Later that year, on May 2, 1967, the Leafs beat the Montreal Canadiens 3-1 at Maple Leaf Gardens to win their most recent Stanley Cup.

Does that mean every Leafs fan should absolutely be rooting for Jimmy Garoppolo and the Niners to trounce Patrick Mahomes and the Chiefs?

Well, when you’ve been waiting 53 years for another Stanley Cup parade, every little bit of hope helps along the way.