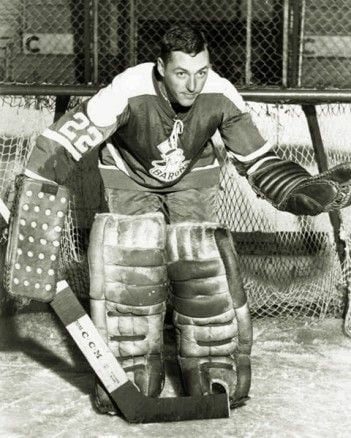 The Blues went one better – or is that worse – than the Leafs, losing all three final series via sweeps. St. Louis would add its name to another short list of Stanley Cup finalists while losing in four straight to the Boston Bruins in the 1970 Cup final.

Jacques Plante started Game 1 of the final in goal for the Blues. But he was struck in the face by a Fred Stanfield slapshot and gave way to Ernie Wakely in a 6-1 loss. Wakely got the starting nod in Game 2 and fell 6-2.

The Blues turned to veteran Glenn Hall to start Games 3 and 4 of the series. In doing so, St. Louis became one of four teams to utilize three different netminders in a Stanley Cup final series and just the second to start three different goaltenders.

Lester Patrick in goal for @NYRangers in the 1928 #StanleyCupPlayoffs against the Maroons #nhlplayoffs #StanleyCup pic.twitter.com/aRcaraXevm

In 1928, Lorne Chabot was in goal for the New York Rangers in the Cup gfinal against the Montreal Maroons. Chabot was struck above the eye with a Nels Stewart shot and was rushed to hospital. With no backup goalie available, Rangers coach Lester Patrick donned the pads and finished the game.

Joe Miller, the official NHL spare goalie at the time, was in net for the remaining three games of the series as the Rangers won the Cup in five games.

Mike Karakas's NHL career was the result of a way-too-patriotic Blackhawks owner, but he won a Calder Trophy and a Stanley Cup. pic.twitter.com/SDjVJKIn2I

In 1938, Chicago was left without a goalie when regular Mike Karakas couldn’t fit his skate over a broken toe. Minor leaguer Alfie Moore took over as the emergency starter and earned a 3-1 win over Toronto.

Moore was declared ineligible for the remainder of the series by the NHL. Chicago recalled minor leaguer Paul Goodman. He took a 5-1 loss in Game 2. Karakas returned to start Games 3 and 4 as Chicago won the best-of-five set 3-1.

The most recent case of three goalies in one Cup final series was in 2006. Edmonton Oilers goalie Dwayne Roloson was injured in Game 1 and replaced by Ty Conklin.

The Oilers opted to start Jussi Markkanen in Game 2. He went the rest of the way as Edmonton lost to the Carolina Hurricanes in seven games.