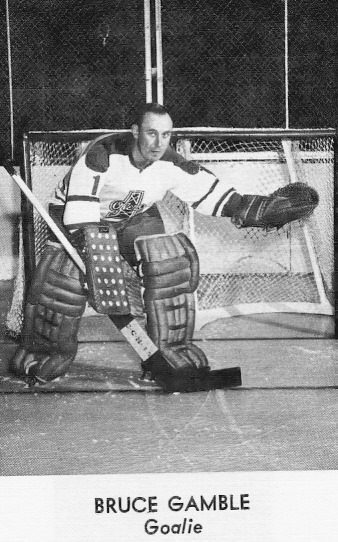 Johnny Bower suffered injured ribs in a collision with New York Rangers forward Jean Ratelle. Terry Sawchuk, out with a charley horse, rushed back to fill the void, only to aggravate the injury more seriously in practice.

Gary Smith, who’d been called up when Sawchuk was originally hurt, also suffered a leg injury in his third game as a Leaf.

Not wanting to risk fracturing the confidence of the young Al Smith, Imlach opted for roll the dice with Gamble, who hadn’t played an NHL game since 1962 with the Boston Bruins.

Gamble was hailed from Tulsa of the Central League. He made 35 saves in his debut, earning the third star in a 3-3 tie with the Stanley Cup champion Montreal Canadiens. Then he got on an amazing roll.

At Montreal the next night, Gamble turned aside 31 shots for a 4-0 victory. Two days later, he blocked 33 shots to beat the Chicago Blackhawks 5-0. Boston’s John McKenzie finally got a puck past Gamble in a 5-3 Toronto win. That ended Gamble’s shutout sequence at 171 minutes and 55 seconds. But he wasn’t done laying goose eggs on the opposition.

In his next start, Gamble delivered a 35-save performance, making a Frank Mahovlich goal stand up for a 1-0 win over the Detroit Red Wings. He posted 27 saves and beat the Bruins 6-0.