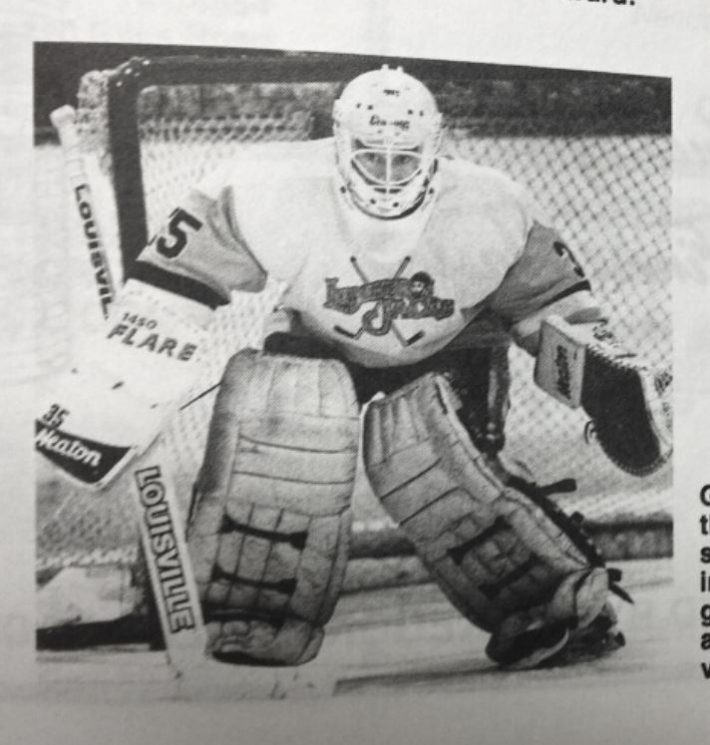 Chris Clifford’s mark on the NHL was brief but it may be forever remembered.

Recalled from the OHL’s Kingston Canadians by the Chicago Blackhawks, netminder Clifford made his NHL debut March 8, 1985. He spelled starter Murray Bannerman for the third period of a 7-2 loss to the Buffalo Sabres.

The @KingstonFronts honoured franchise great Chris Clifford this past weekend, raising his #29 Kingston Canadians jersey to the rafters.

Clifford became the first #OHL goaltender to ever score a goal in January 1986.

In his 20 minutes of work, Clifford turned aside all eight shots aimed his way.

He wouldn’t be back in an NHL net again until Jan. 12 1989, again as the Blackhawks faced the Sabres, and this time under bizarre circumstances.

“I took Belfour out because I knew our team lost its composure,” Keenan explained to UPI. “They got two quick goals and we needed time to regroup.

“Clifford hasn’t played in the NHL. No sense leaving him in in that situation.”

Clifford didn’t face a single shot during his 4:10 between the posts during Chicago’s 6-5 loss. His 24 minutes of work are the NHL career record for longest time played without allowing a single goal.

In between his two NHL stints, Clifford went on the offensive in the OHL. Always a slick puckhandler and passer, he recorded 14 assists while playing for Kingston. But on Jan. 7, 1986, Clifford took it up another notch.

Tonight, the @KingstonFronts are honouring Chris Clifford, who played four seasons in net for the Kingston Canadians from 1983-87, and was the first goaltender to ever score an OHL goal 🏒 pic.twitter.com/Corc2ILumW

The Canadians led the Toronto Marlboros 4-3. Toronto pulled its goalie in the final minute of the third period.

Making a glove save, Clifford dropped the puck near the right faceoff circle and lofted a shot down the ice and into the Marlies’ vacated net.

He was the first goaltender to score a goal in OHL history.