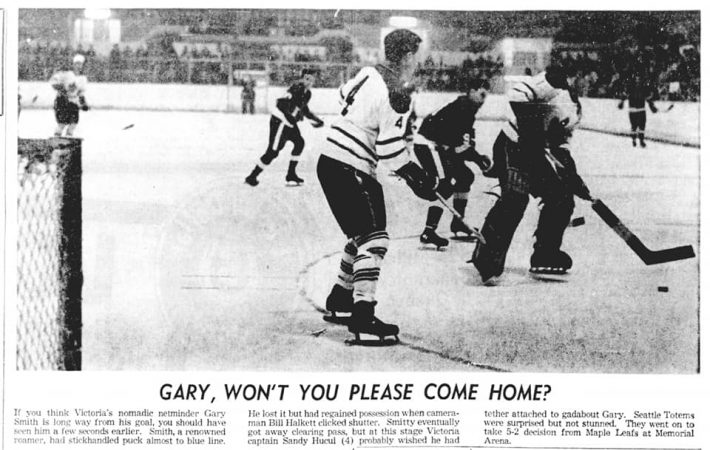 You might see a lot of information tabulated in the scouting report of an NHL goaltending prospect. In the winter of 1966, Gary Smith added a couple of additional categories.

The Leafs were playing at the Montreal Forum the night of Dec. 21, 1966, en route to a 6-3 shellacking at the hands of the Canadiens.

Both of Toronto’s regular goalies, Johnny Bower and Terry Sawchuk, were out with injuries. Journeyman pro Bruce Gamble got the starting nod in Montreal, with Smith serving as his back up.

Known as Suitcase because he played for so many teams, as the game progressed, Smith decided he was going to give everyone in Montreal an early Christmas present to remember. He was going to skate the length of the ice and score a goal.

Catching a shot in his trapper, Smith dropped the puck and set off up ice. He crossed the blue line and was within a few feet of the center red line when he attempted to pass the puck to a teammate. Montreal defenseman J.C. Tremblay intercepted Smith’s pass and immediately launched a shot toward Smith’s vacated net.

Toronto defenseman Marcel Pronovost, who’d thought it a good idea to guard the goal while Smith was off on his offensive foray, kicked Tremblay’s shot aside.

In a game that was often devoid of action, Seals goalie Gary Smith brought the crowd to its feet when he took off with the puck, skating to centre ice before dumping it into the Leaf zone: pic.twitter.com/fjk0rFu3gB

“He made Jacques Plante look like a chicken,” Montreal coach Toe Blake recalled to the Montreal Gazette of the former Habs netminder who was among the first to wander from his goal crease to corral loose pucks.

The next day, NHL supervisor of officials Fran Udvari discussed proposing a rule change to prohibit wandering netminders. “(A goalie) isn’t supposed to be carying it like a football player,” Udvari explained to the Victoria Times Colonist.

Imlach was appalled that the NHL might punish his creative netminder. “They’re trying to take an exciting play out of hockey,” Imlach growled. “I’ll vote against it.”

Rule 27.7, instituted after #leafs goalie Gary Smith got knocked out by a check from #habs JC Tremblay while carrying the puck across the red line https://t.co/KZB4Mz5QXV

The NHL did make a rule change following Smith’s adventure. Going forward, goaltenders weren’t permitted to skate with the puck beyond the center red line.

Smith set scoring a goal as his NHL career goal but it never happened for him.