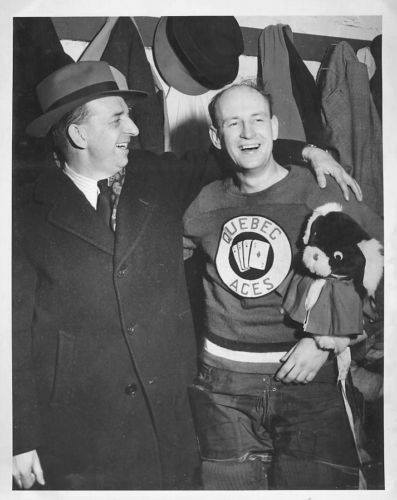 He arrived at Windsor Arena Nov. 4, 1938 known simply as George Imlach, but by George, by the end of that night, he’d head back to Toronto with the handle that would make him famous within the hockey world.

Punch Imlach put the punch in four Stanley Cup wins as coach of the Toronto Maple Leafs during the 1960s, including the club’s most recent title in 1966-67. But it was Windsor Arena that put the Punch in Imlach.

He was a shifty center with the Toronto Goodyears in the Ontario Hockey Association senior series, a squad that travelled to southwestern Ontario for a pre-season exhibition tilt against the Windsor Chryslers of the Michigan-Ontario League.

A curious crowd of 2,900 showed up at the barn to check out the heralded Toronto visitors and they were given an early reason to cheer when Windsor’s Herb Jones converted Bert Tooke’s feed 6:10 into the game with Johnny Inglis in the penalty box for the Goodyears.

It was a short-lived celebration, however. Wilfred (Blondy) Sutcliffe tied it for Toronto, then Imlach and Goldup made it 3-1 Goodyears by the end of the opening frame. Inglis upped it to 4-1 in the second period, then O’Flaherty and Windsor’s Gordie Anderson traded third-period goals in a 5-2 Goodyears victory.

Shortly after O’Flaherty tallied what would be the game’s final goal just 2:45 into the period, fireworks broke out on the ice. Windsor’s Norval Fitzgerald tangled with Windsor’s Eddie King and was barely out of the penalty box when he set his bombsights on Imalch.

“(Fitzgerald) thudded into the boards with George Imlach and uncorked a swing as the Toronto player went to the ice,” wrote The Windsor Star’s Doug Vaughan. “Fitzgerald drew a major and Imlach, who was knocked out in the collision, had to be assisted from the ice.”

In his 1969 book Hockey Is A Battle, which he penned with Scott Young, Imlach picks up the story. “I’d always been just plain George Imlach up until then,” Imlach wrote. “But there was this game in Windsor. I was going along the boards and this fellow took me into the boards hard and gave me the elbow and the foot thing at the same time. Up in the air I went and down I came and hit my head on the ice. I was knocked cold.

“When I came to, I guess the only thing I knew was that someone had done this to me, so I came up swinging. And who was I swinging at but Bill Smith, our trainer.”

Concussed, Imlach’s teammates announced he was punch drunk. The Toronto media covering the game picked up on this and he became known in the papers as Punchy Imlach. “Until some kindly typesetter got fed up with putting the last letter on and just left it at Punch,” Imlach noted.