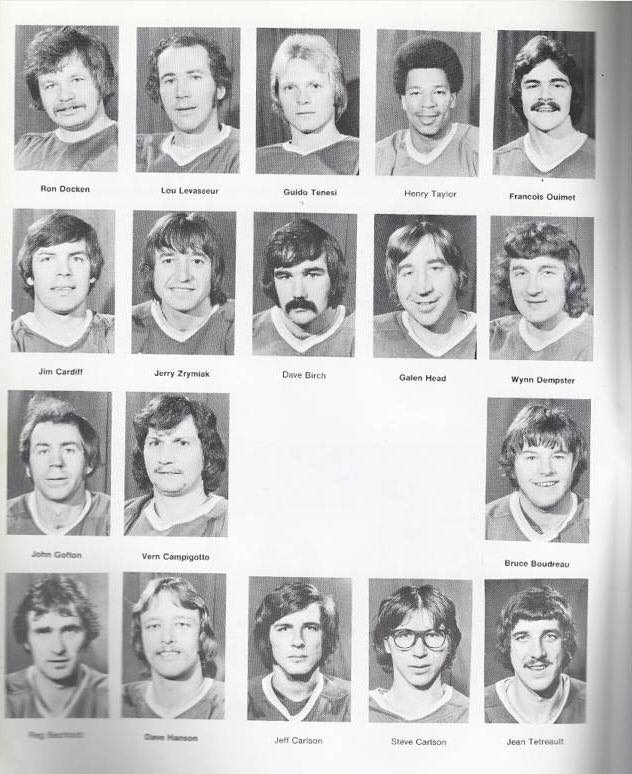 Last month was the anniversary of the 1977 release of the hockey cult classic Slap Shot. In the film, the fictional Charlestown Chiefs of the equally fictional Federal League skate their way through the fight-filled loop to the championship, all the while well player-coach Reg Dunlop spreads false rumors about the team relocating to Florida.

The movie is loosely based around the exploits of the 1974-75 Johnstown Jets, who won the North American Hockey League title. The writer of the film – actually, it was originally a book – is Nancy Dowd, the sister Jets player Ned Dowd.

Ned Dowd plays Ogie Ogilthorpe in the film but he helped his sister put together her story by leaving a tape recorder rolling regularly inside the Jets’ dressing room.

If you look at the accompanying Jets head shots from that season, you’ll see plenty of familiar faces. Jets goalie Ron Docken portrayed backup goaltender Lebrun in the film, and was the stunt double for Yvon Barette, who played goalie Denis Lemieux.

Forward Jean Tetreault filled the role of Bergeron. He’s the guy who the camera shows taking his teeth of right before going on the ice. Defenseman Guido Tenesi was Billy Charlebois, who hails from . . . if I can read the card here . . . Moose Jaw, Saskatchewan.

And of course, in the bottom row are the notorious Hanson Brothers – Dave Hanson, and Jeff and Steve Carlson.

You’ll recognize a couple of others in this photo. John Gofton portrayed Nick Brophy, the Hyannisport Presidents’ center who pisses all over himself in the movie’s opening scene. Bruce Boudreau would go on to gain fame as an NHL player and coach but in Slap Shot, he was No. 7 for the Presidents.

Gofton and Boudreau share another claim to fame. They’re the only people to appear in Slap Shot and win a Memorial Cup. Boudreau won with the 1974-75 Toronto Marlboros. Gofton won with the 1961-62 Hamilton Red Wings.

Reg Bechtold, Danny Belisle, Louis Levasseur, Galen Head, Ted McCaskill, Reg Krezanski, Dick Roberge and Ray Schultz were among the other minor pro players who were given uncredited roles in the film.

Schultz is the brother of famed Philadelphia Flyers enforcer Dave (The Hammer) Schultz. McCaskill’s son Kirk was a major-league pitcher. Belisle played and coached in the NHL.