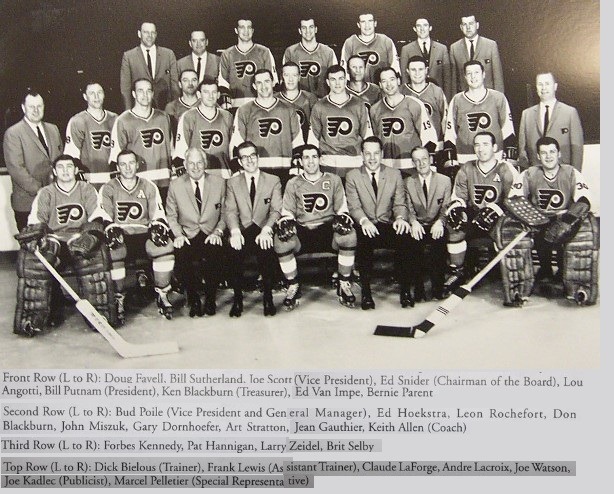 On the ice, the Philadelphia Flyers were an instant success story – during the NHL regular season.
Philly finished first in the West Division in 1967-68, the first season of the NHL expansion from six to 12 teams. They were the first expansion team to finish atop a division in their inaugural NHL season since the 1926-27 New York Rangers.

Like those Rangers, the first-year Flyers also were losers in their initial playoff series. In fact, through their first five NHL campaigns, Philly twice failed to make the playoffs, and three other times, were knocked out during the opening round of postseason play.

It wouldn’t be until the spring of 1973, when Philadelphia defeated the Minnesota North Stars in a six-game quarterfinal series, that the Flyers would finally win a playoff set. But the following spring, they would set the NHL on fire.

Bobby Orr, Phil Esposito and John Bucyk of the #Bruins.

The Flyers defeated the Boston Bruins in six games to become the first of the 1967 NHL expansion franchises to capture the Stanley Cup. Four of the original Flyers were around to be part of that Stanley Cup triumph – goaltender Bernie Parent, defensemen Ed Van Impe and Joe Watson and forward Gary Dornhoefer.

The 1973-74 Flyers were the first NHL team to win the Stanley Cup with one of their original players in the lineup since the 1932-33 Rangers. Frank Boucher, Ching Johnson, Murray Murdoch and the Cook brothers, Bill and Bun, were all original 1926-27 Rangers who were part of that 1932-33 Cup win by the Broadway Blueshirts.

And like the Rangers, Philly’s Cup win came exactly seven seasons after they finished in first place in their initial season.