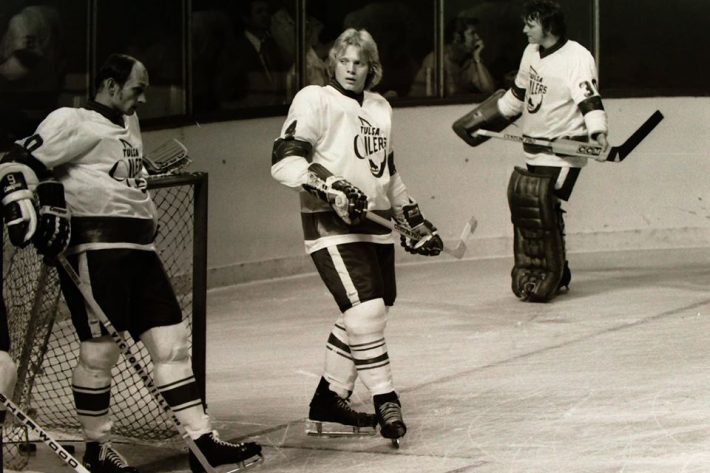 Well, would you look who it is. Today’s featured old-time hockey hero is Charlestown Chiefs defenseman Billy Charlebois, who hails from . . . if I can read the card here – Moose Jaw, Saskatchewan.

That’s accurate but it isn’t fact.

In the 1977 hockey cult classic Slap Shot, this was the fellow who portrayed Chiefs rearguard Billy Charlebois, the vain, mirror-obsessed pretty boy.

In reality, not only isn’t he from Moose Jaw, he wasn’t even born in Canada. The real life guy who filled this role in Slap Shot was actually a pro hockey player – Detroit-born Guido Tenesi. In this photo, he’s toiling for the Tulsa Oilers of the Central Hockey League during the 1973-74 season.

He won an AHL Calder Cup with the 1973-74 Hershey Bears. But it was his fortuitous stint with the North American Hockey League’s Johnstown Jets in 1974-75 that turned him into a film icon.

The Jets won the Lockhart Cup as NAHL champs that season but what made the majority of their players famous was their roles in Slap Shot. Steve Carlson, Jeff Carlson and Dave Hanson portrayed the infamous Hanson Brothers. Ned Dowd was the notorious Ogie Ogilthorpe. Others like Tenesi, Jean Tetreault, John Gofton and Ron Docken filled lesser roles in the flick, most appearing without any lines.

Yet without saying a word, each of them remain folk heroes to generations of hockey fans to this day.