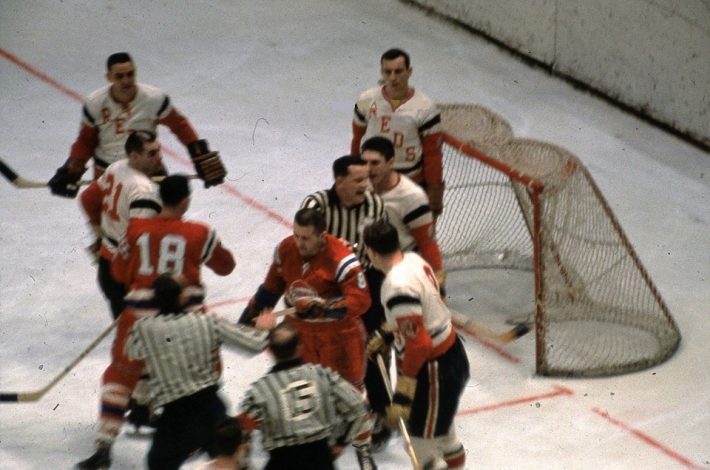 It’s often said of a victory in hockey that it wasn’t pretty but it was still two points.

In the case of the New York Rangers, one of the most significant deals in franchise went down because someone was pretty.

In the spring of 1965, Rangers general manager Eddie Francis set out to acquire a netminder. The goalie he had in mind was Ed Giacomin of the American Hockey League’s Providence Reds. Francis knew he’d be required to pay a handsome price for Giacomin – in more ways than one.

Francis knew that Reds owner Lou Pieri was of the theory that good-looking players were good for marketing, because they sold tickets. When it came time to meet with Pieri to talk trade, Francis eschewed the tradition approach of supplying data to the Hollywood option of presenting 8×10 glossy photographs of the players he intended to offer.

One by one, Francis began to slide the photos across Pieri’s desk. There was goalie Marcel Paille, right-winger Sandy McGregor and defenseman Aldo Guidolin. Finally, out came the head shot of forward Jim Mikol. The Rangers player was known for being rugged, matinee-idol handsome.

Pieri stood up, reached across to shake the hand of Francis, and told him that the Rangers had themselves a new netminder.

Giacomin who spend over a decade guarding the net for the Broadway Blueshirts, becoming one of the most popular players in franchise history.

He was selected to five NHL All-Star Games, shared the Vezina Trophy with Gilles Villemure in 1970-71 and helped backstop the Rangers to their first Stanley Cup final appearace in 22 years during the spring of 1972.

Giacomin was inducted into the Hockey Hall of Fame in 1987.