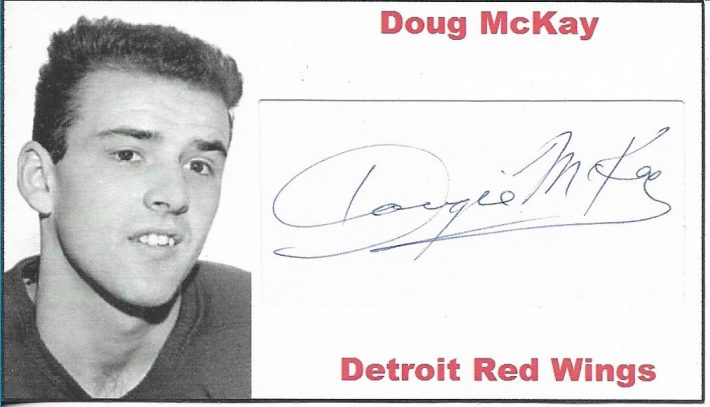 Doug McKay’s NHL career lasted one game but unlike every other player in the history of the league, that one game came during the Stanley Cup final.

McKay, who died this week in Burlington, Ont at age 90, suited up for the Detroit Red Wings for Game 3 of the 1950 Cup final series against the New York Rangers. He didn’t figure in the game summary in terms of points or penalties as the Wings downed the Rangers 4-0 to take a 2-1 lead in the best-of-seven series.

The Windsor Star report of the game said McKay was used sparingly during the third period.

Condolences to Doug McKay Jr. and his family on the passing this week of Doug McKay Sr., who was 90. McKay Sr. is one of the most fascinating stories in NHL, the guy who played one, just one, NHL game and it was in a Stanley Cup-final winning Game 7 for Detroit in 1950.

McKay is one of three players in league history to have an NHL career of one game in length and have that game be played in the Stanley Cup playoffs.

McKay and Gord Haidy both made their lone NHL appearance for Detroit during the 1950 playoffs.

However, McKay is the only one to do it in the final series. Haidy played Game 4 of the 1950 semifinal series against the Leafs on April 4, a 2-1 Detroit win. ChrisHayes played Game 3 of Boston’s semifinal sweep of the Blues in 1972.

Interestingly, all three were on the winning side in their only game. And two of the three played their lone game at Maple Leaf Gardens. The Rangers, Detroit’s opponent in the 1950 final, couldn’t get ice at Madison SQuare Garden, so they played two games at MLG, Games 2 and 3 of the series. The other five games of the 1950 final were held at Olympia Stadium.

Even though the Wings won the 1950 Cup final, McKay’s name was not inscribed on the Stanley Cup.