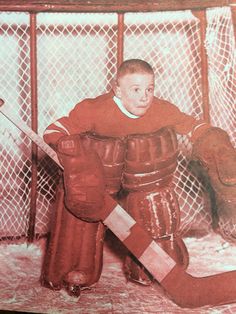 As a youngster, only Ken Dryden’s pads stood tall.

It’s often noted that the Toronto Maple Leafs drafted Tuukka Rassk and then traded the future Vezina Trophy and Stanley Cup winner to the Boston Bruins before he’d ever played an NHL game.

While that fact is irrefutable, what’s also true is that on June 28, 1964, the Bruins made a much bigger mistake involving a future Hall of Fame netminder. That day, Boston dealt defenseman Guy Allen and right-winger Paul Reid to the Montreal Canadiens for right-winger Alex Campbell and a goaltender by the name of Ken Dryden.

The Bruins had selected Dryden 14th overall in the 1964 NHL amateur draft.

Dryden wouldn’t make the NHL until 1971 but the goaltender who’d help Cornell win the 1967 NCAA title and played for Canada at the 1969 world Championship would become an NHL star and a personal nightmare to the Bruins.

Dryden won five Vezina Trophies and was a five-time NHL First All-Star Team selection. He’s the only the player in NHL history to win the Conn Smythe Trophy before he won the Calder Trophy.

He also backstopped the Canadiens to six Stanley Cup titles durng an eight-season NHL career. En route to four of those Cup titles, Dryden’s Canadiens beat the Bruins in the playoffs.

Montreal upset Boston in the 1971 quarterfinals. The Habs also took out the Bruins in the 1977 and 1978 Cup final series and the 1979 semifinals.