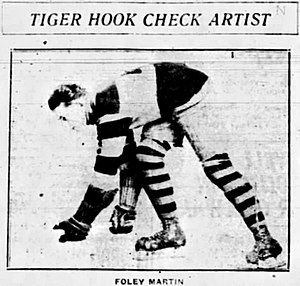 On the eve of the start of the 1923-24 Western Canada Hockey League season, the Calgary Tigers were in Seattle for an inter-league match with the Seattle Metropolitans of the Pacific Coast Hockey Association.

Tigers forward Foley Martin was being bothered by a corn on his foot, and decided to take matters into his own hands – literally. Martin took a knife and sliced the growth from his foot.

It would prove to be a fatal decision. The wound became infected and Martin was overcome with blood poisoning. In the days before penicillin, this was a deadly ailment. Survival depended upon the patient’s own body’s ability to fight off the infection as it tried to spread.

Martin’s condition worsened. He was admitted to Seattle General Hospital and developed double pneumonia. At 4:47 a.m. on Sunday, Dec, 9, 1923, his young bride of one year at his side, Martin, 22, was pronounced dead.

Though never a prolific scorer – Martin scored 17 goals over two pro seasons – he was known for his diligent work as a checker and was a clever stickhandler. He was also a speedy skater. He deployed his efficient hook check to deprive many a player of the puck and was praised for his ability to think the game.

As local boy who played all his amateur hockey in Calgary, Martin was among the most popular Tigers.

“Martin was in line to become one of the greatest players in the West,” Saskatoon player-manager Newsy Lalonde told the Saskatoon Star-Phoenix. “He had everything to make him a star.

“All he needed was experience and he would have been able to rank with the greatest.”

Martin’s body was returned to Calgary for his funeral. Tigers manager Lloyd Turner proclaimed that no Tigers player would ever wear the No. 5 sweater donned by Martin since he joined the club in their first season in 1921-22.

The Tigers went dormant when the western league folded in 1926. However, even in the 1930s when the Tigers were reborn as a minor-pro franchise in other Western Canadian leagues, no player was ever assigned No. 5.

Martin’s number was the first ever retired by a pro hockey club.