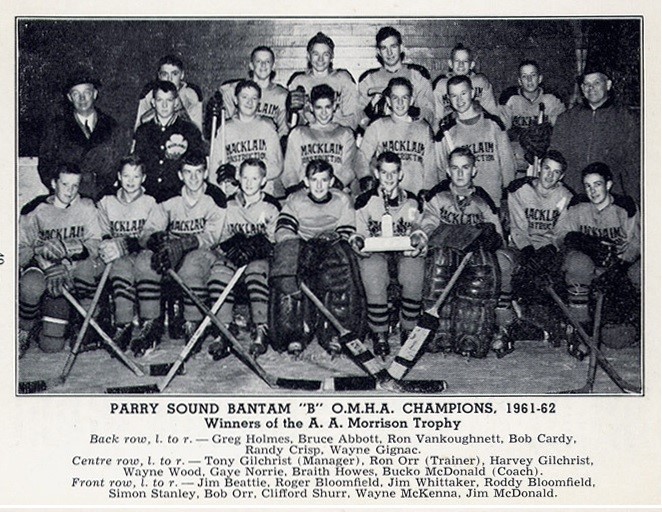 There’s a lot of famous hockey folks packed on this one bantam squad. In 1961-62, this team from Parry Sound, Ont. captured the Ontario Minor Hockey Association’s bantam B provincial title.

At the time, the most famous member of the team was the coach, former NHL defenseman Wilfred “Bucko” McDonald. During a 10-season career that saw him pay 652 NHL games, McDonald won back-to-back Stanley Cups with the 1935-36 and 1936-37 Detroit Red Wings and added a third title with the 1941-42 Toronto Maple Leafs. He was an NHL Second All-Star Team selection in 1941-42.

McDonald would soon be overshadowed by that other future NHL defenseman on his club. The kid in the front row with the captain’s “C” on his sweater, holding the trophy.

That’s Bobby Orr. Maybe you heard of him. From 1968-75, he won eight Norris Trophies, two Stanley Cups, two Hart Trophies, two Conn Smythe Trophies and was the only defenseman to lead the NHL in scoring, a feat he achieved twice.

Yeah, he was pretty good.

No, Bloomfield never made it to the NHL. He starred on a much bigger stage.

During his time with Broome County, that was when the hockey cult classic Slap Shot was filmed. Several NAHL players drew roles in the film. Some, like the Hanson Brothers – aka Steve Carlson, Jeff Carlson and Dave Hanson – gained notoriety for their starring roles.

Others like Bloomfield, served in lesser but nonethless vital roles. Bloomfield’s assignment was to serve as Paul Newman’s stunt double. Yes, the guy who sat next to Bobby Orr stood in for Paul Newman.

The next time you sit down to watch Slap Shot and you see Reg Dunlop racing up the ice in his No. 7 Charlestown Chiefs jersey, that’s actually Bloomfield doing the skating.