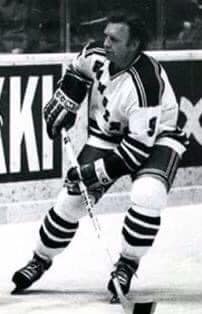 Bobby Hull was the first player in NHL history to score more than 50 goals in a season. He was the second in league history to ascend to the 600-goal plateau.

Hull’s curved stick and heavy shot put a fright into NHL netminders. Hull once allowed that he was surprised that he’d never killed a goaltender during his playing days. His powerful slapshot was deadly accurate. Had the Rocket Richard Trophy existed in Hull’s era, he’d have won it seven times.

OTD in 1971 – Bobby Hull scores in overtime of Game 5 to give the #Blackhawks a 3-2 series lead over the Rangers in the conference semifinals.

The Hawks would go on to win the series in seven games and advance to the Stanley Cup Final. (April 27, 1971) pic.twitter.com/fz13vGXOB9

Hull scored 610 NHL goals with the Chicago Blackhawks (604), Winnipeg Jets (four) and Hartford Whalers (two). What isn’t often referenced is that he also scored goals for the New York Rangers.

That’s because all of the Golden Jet’s work as a Ranger was done during exhibition play.

Hull retired from hockey following the 1979-80 season. He’d returned to the NHL last season with the Jets and Whalers after spending seven seasons with the Jets in the WHA.

During the summer of 1981, Hull was making noise about launching a comeback but there was only one team that he sought to do so with – the Rangers. Hull’s former Jets linemates Anders Hedberg and Ulf Nilsson were with the Rangers. As a trio, that unit terrorized the WHA. He felt that if reunited, they could do likewise in the NHL.

That was all Rangers coach Herb Brooks needed to hear. Hull, 42, was offered a training-camp tryout with the Broadway Blueshirts.

Brooks gushed over Hull in camp. “Look at him out there,” Brooks told the New York Times. ”He’s happy to be here. He’s youthful, psychologically.”

Reunification plans were derailed when Nilsson suffered a knee injury playing for Sweden in the 1981 Canada Cup, leaving him unavailable until November. Still, Hull emarked with the Rangers for a preseason tour of Europe. He played in five games, collecting a goal and an assist. He tallied against Mike Palamteer in a contest played in Sweden against the Washington Capitals.

#OTD 3-May-74 #GoJetsGo make 2 of their most important signings in team history when they ink Swedes Anders Hedberg & Ulf Nilsson-They will play w/Bobby Hull forming the famous "Hot Line" which wreaks havoc in #WHA for 4 seasons & 2 AVCO Cups before the pair jump to NHL Rangers pic.twitter.com/MlJwtLtwML

Hull’s shot was still there but his legs were gone. Though not offered a contract, Hull was invited to continue to work out and see if things improved with his conditioning. Hull declined the offer and headed home on Oct. 8, 1981. He’d never play another NHL game.

“Despite the brief time he spent here, I can’t tell you how much Bobby has meant to our organization,” Rangers GM Craig Patrick told the New York Daily News. “The quality of his character and his attitude both on and off the ice has been a tremendous inspiration to us all.

“I’m sure he will be back in hockey in some capacity in the near future.”

It wasn’t the first time that Hull suited up for the Rangers in a European exhibition series. Following the 1958-59 season, the Rangers and Boston Bruins venured across the pond for a series of games. The two teams would play 23 games in 26 days across 10 cities in England, Switzerland, France, Belgium, West Germany, and Austria.

Rangers star Andy Bathgate wasn’t able to make the trip, so the Rangers added Hull and Ed Litzenberger from Chicago.

While in Paris, Hull climbed to the top of the Eiffel Tower. Upon returning to the NHL, he climbed up among the league’s upper echelon of stars.

“That’s where I learned how to play,” Hull told NHL.com. “I wanted to see all of Europe that I could and I suppose I played smart hockey.

“I was just a young guy, 20 years old. When I came back, I was a more complete player and it went on from there.”